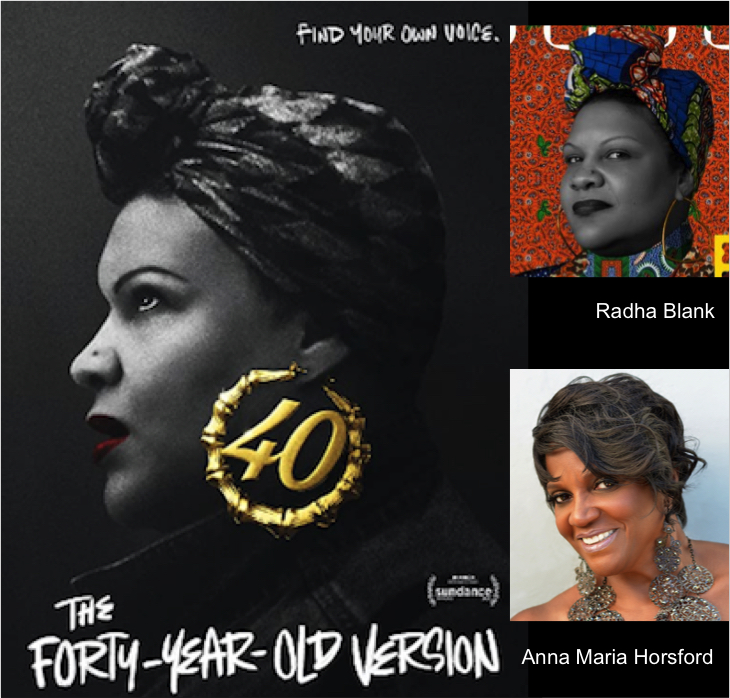 In the film The Forty-Year-Old Version, desperate for a breakthrough as she nears the big 4-0, struggling New York City playwright Radha finds inspiration by reinventing herself as a rapper. Join the film’s director Radha Blank and award-winning actress Anna Maria Horsford as they discuss the creative process, ideas and themes in the film.

Radha Blank is a writer, director, producer, and actress born and raised in New York City. Her plays include HappyFlowerNail, Casket Sharp, nannyland and SEED. Blank produced two seasons of the Netflix series She’s Gotta Have It, an adaptation of Spike Lee’s 1989 film, and she also wrote for the popular TV series Empire and The Get Down. In 2020, Radha Blank won the directing award at Sundance for her semi-autobiographical feature film The 40-Year-Old Version, which premiered on Netflix in 2020. @fortyyearoldversionfilm @radhamusprime

Anna Maria Horsford, award-winning actress, has had a busy Pandemic summer, appearing in tv’s The Connors, Pose, with Billy Porter, and the upcoming rom-com, Vacation Friends starring Lil Rel Howrey and Yvonne Orji. Best known to tv audiences as Thelma on Amen, Dee on The Wayans, and her unforgettable portrayal of Ice Cube’s mother in the Friday trilogy, her career spans genres. She’s performed in everything from Daytime Soaps (The Bold and the Beautiful, for which she received two Emmy nominations) to mega-hits on the Broadway stage. She’s also a member of the Director’s Guild of America. Ms. Horsford has a strong commitment to emerging industry stars and has twice been invited to participate in the Sundance Acting Lab. @annamariahorsford

0 replies on “The Forty-Year-Old Version”